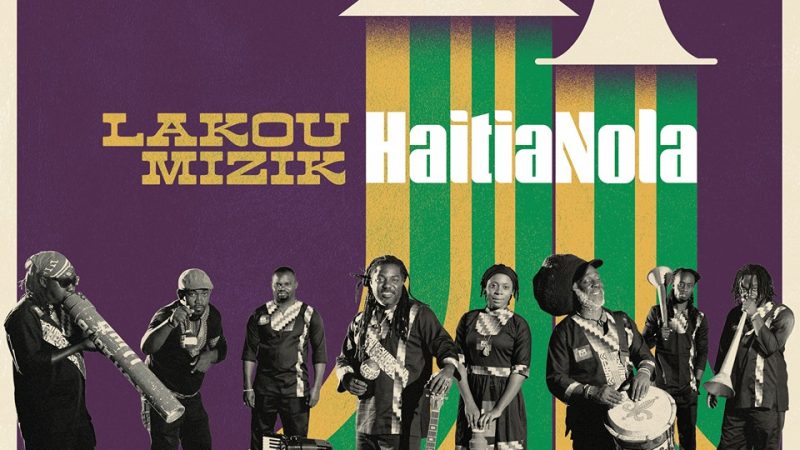 August 13, 2019 – HaitiaNola is a once-in-a-lifetime album that brings together Haitian roots revival collective Lakou Mizik and an incredible line-up of guest artists from the New Orleans music scene. The project was inspired by the historical, cultural and spiritual connections between the people and music of New Orleans and Haiti. HaitiaNola will be released worldwide by Cumbancha on October 25th, 2019 in CD, LP and digital formats.

Born out of the tragedy of the 2010 earthquake, the members of ​Lakou Mizik ​first came together with the goal of promoting positive connections to Haiti through music and culture at a time when international media was filled with negative stories and imagery from the country. They furthered their mission with a celebrated 2016 debut album, ​Wa Di Yo​, and multiple international tours.

The seed for HaitiaNola (Haiti & NOLA & Hispaniola = HaitiaNola) was planted in 2017 when the band was invited to play the legendary New Orleans Jazz & Heritage Festival. It was an eye-opening pilgrimage to the mythical music city and the band members immediately felt a connection. The music, the food, the architecture all reminded them of home.

For those familiar with the history of Haiti and New Orleans, this makes a lot of sense. The Caribbean country and the Crescent City have deep historical connections. In 1791, Haitian slaves began rising up against their French masters and earned their freedom in 1804 after years of bloody rebellion. Thousands of refugees consisting of French colonists, freed people of color and slaves fled the turmoil of the revolution and ended up in the nearest French territory: New Orleans. This influx doubled the city’s population and forever changed its ethnic and cultural identity. To this day, Haitian influences can be felt from the rhythms of the Mardi Gras parades to the swampy grooves of funk.

A year later Lakou Mizik was invited back to Jazz Fest for the second time (a rare honor) but this time the focus was on the album and musical collaborations. New Orleans producer Eric Heigle, fresh off a GRAMMY win with his band Lost Bayou Ramblers and a role in the production of indie rock supergroup Arcade Fire’s latest album, signed on to produce the project. Barebones tracks were written prior to the recording sessions and Heigle would become an essential contributor, artistic director and manager of the occasionally chaotic creative process. Even though he had to pick up some Haitian Kreyòl along the way, music provided a common language.

Arcade Fire’s Win Butler and Régine Chassagne, who offered to let the band use their private recording studio in New Orleans and who participated in the recording, are longtime advocates of Haitian culture. Régine is the daughter of Haitian immigrants and Win and Régine, along with Preservation Hall Jazz Band director Ben Jaffe, co-founded the Krewe du Kanaval, a Mardis Gras krewe that celebrates the shared connections between Haiti and New Orleans. “Wherever I go in New Orleans I feel Haiti,” says Chassagne. “The music I hear, the food I taste, the colors, the movement, the spirit of the city.” Jaffe also gave Lakou Mizik additional time at the Preservation Hall’s private recording studio. According to Jaffe, ““There would be no New Orleans music without Haiti. It’s been one of the most important influences on New Orleans going back 200 years.”

Soon after the NOLA sessions, Eric Heigle and Jon Cleary traveled to Haiti to record with Lakou Mizik at the Artists Institute in Jacmel. Over the next few months additional sessions allowed for more guests to jump in. Iconic figures Cyril Neville, Trombone Shorty and Anders Osborne, rising star Tarriona “Tank” Ball (Tank and the Bangas), NOLA institution King James (from the Special Men), even Win & Régine from Arcade Fire helped create the unique, culture-melding sound of this album.

The result of this collaborative gumbo is the album HaitiaNola, a sweaty celebration that manages to connect not only the rhythms and sounds of the two places but also the gritty energy, the unmistakable mysticism and the carefree Mardi Gras incantation of laissez les bon temps roulez (let the good times roll) that persists in both countries.

In Haitian Kreyòl the word lakou carries multiple meanings. It can mean the backyard, a gathering place where people come to sing and dance, to debate or share a meal. It also means “home” or “where you are from,” which in Haiti is a place filled by the ancestral spirits of all the others that were born there. With HaitiaNola, Lakou Mizik expands their lakou, to take in their cultural cousins and actual descendants in New Orleans. With music to lift them up, these two places have pushed through unimaginable tragedy in recent years. HaitiaNola celebrates this defiantly joyous spirit and the rhythmic roots that have connected them for more than two centuries.

For more information, music samples, or to arrange interviews, contact: 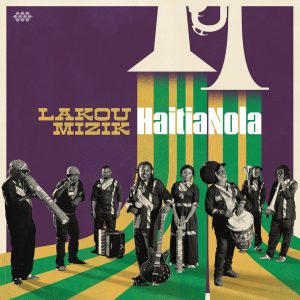